There is so much wildlife in the Lake District, but where can you see it? From Wildlife and National Trust nature reserves you can see red squirrels, ospreys and badgers in the Lake District. It’s home to England’s highest mountain, Scafell Pike, largest lake, Windermere, and some of the tallest trees in England, but there are plenty of small things to see too.

What animals can you see in the Lake District and where?

Where to see Badgers in the Lake District

Cumbria is a great place to spot badgers, they love the soft earth and cold weather of the Lake District. Lucky for us we don’t need to stay out in the cold all night to spot them, The Badger Bar at The Glen Rothay Hotel in Rydal offers a chance to see the local badger sett while having a pint. The staff have been feeding the badgers here scraps from the pub and have even set up a Badger Cam so you can keep up to date with the action.

Where to see red squirrels in the Lake District 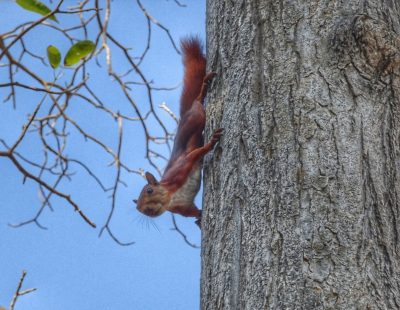 The north of England is a refuge for red squirrels, pushed out of many parts of the UK by their bigger non-native grey cousins, red squirrels have been on the decline since the late 1870’s. Even Beatrix Potter loved red squirrels, with her character Squirrel Nutkin being a much-loved childhood memory of many. Where is the best place to see red squirrels in the Lake District? In fact there are many great places to see red squirrels here, some popular spots are; Dodd Wood, Keswick. Allan Bank, Grasmere. Whinlatter Forest Park, Keswick. Greystoke Forest, Penrith. Smardale Nature Reserve, Kirkby Stephen. January to early spring is the best time to see red squirrels as it’s mating season, males can be see chasing females through the trees in daring acrobatic displays.

Where to see osprey in the Lake District

Osprey’s had not been seen breeding in the Lake District for over 150 years until 2001 when they first nested by Bassenthwaite. There are now several pairs returning to nest each year between the months of April and August, with the fledglings finally leaving the nest to make their long journey south to West Africa in early September.

Where are the ospreys in the Lake District? Visit Dodd Wood where knowledgeable volunteers can help you spot ospreys on Bassenthwaite with binoculars. On Esthwaite Water you can opt to do the self-guided Osprey Safari and spot ospreys that have been visiting the lake for the last 13 years, and nesting for the last 5. You can also spot red kites, otters, heron and bittern. Or head over to Foulshaw Moss (Wildlife Trust) to see another breeding pair of 6 years or Roudsea Wood and Mosses (Woodland Trust) for another top spot of where to see wildlife in the Lake District.

While not technically a wildlife attraction, the Lake District was the last place in England thought to have wild wolves. Predator Experience have brought them back in the form of Maska and Kajika, two tame wolves that you can walk with, learning about them and being part of the pack (from £95pp for 1 hour). They also have two red foxes, Fynn and Todd, that you can meet as well as eagle experiences and falconry tuition.

The slow worm may look like a worm or snake, but it is in fact a legless lizard. It loves hiding out in compost heaps or basking in the sun. They can live up to an astounding 20 years and grow to 50 cm in length. It’s possible to spot them out in Cumbria between the months of March to October, as they hibernate over winter. Slow worms can be found in heathland, grassland as well as woodland edges where they can find invertebrates to eat and a sunny patch to sunbathe. 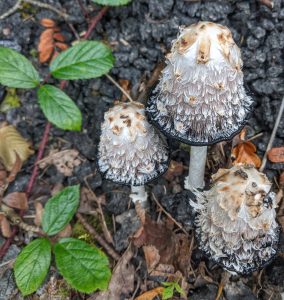 Where to see red deer in the Lake District

The largest falcon in the UK and faster than a cheetah, the peregrine falcon is now widespread in the UK after numbers fell dramatically during the 1960’s due to persecution. Random animal fact; they can dive up to speeds of 200mph. Where can peregrine falcons be seen in the Lake District? Visit Borrowdale Valley during the spring or Falcon Crag for a chance to see them nesting, you may spot one overhead anywhere in the Lake District, but you’ll have to be quick! 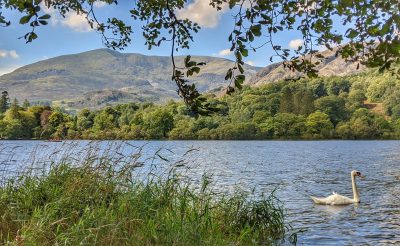 Where to see wildlife in the Lake District

These are the top Lake District nature reserves to spot wildlife at any time of year;

Wildlife parks in the Lake District

There are some great Lake District wildlife parks to visit too if you want a guaranteed animal encounter. The South Lakes Safari Zoo is a fantastic day out for the family, couples, or a solo traveller as you can walk amongst lemurs, capybara’s, wallabies and penguins. You can also feed giraffe and spot elusive snow leopards. Visit South Lakes Safari Zoo for as little as £15pp when booking ahead online.

For the north of the Lakes there’s the Lake District Wildlife Park near Bassenthwaite Lake, containing over 100 species of exotic animals on a 25 acre site. Make sure to catch a talk to learn a bit more about the conservation efforts of the park with a particular focus on Madagascar.

There are so many things to do in the Lake District, but nature is the reason it’s so special. It contains 55,690 Sites of Special Scientific Interest, 23 Conservation Areas and was put on the UNESCO World Heritage List in 2017. The National Trust owns over 20% of the Lake District National Park and conserves everything within it, some thanks to local landowner Beatrix Potter who donated 4,000 acres to the trust. If you’re interested in learning more about the Lake District make sure to subscribe to the newsletter to keep in touch.

Psst. Want to know how to save money and travel for FREE?

Ethical Superstore – My go to site for cleaning products, eco clothing and even groceries. All ethically tagged and delivered free from plastic packaging. Plus eco friendly alternatives to your toiletries.

G Adventures – A sustainable, fun, responsible travel company. I’ve travelled with them many times and wouldn’t hesitate to recommend any of their amazing trips.

Contiki – The day job. Group travel for 18/35 year olds and memories to last a lifetime.

Hey, some links in this post are to affiliate sites. If you purchase something through them, I earn a small commission at no extra cost to you.

A note on Amazon Affiliates – LW no longer uses this program, instead focusing on eco friendly alternatives. Read the reasons why here. LW will not profit from any links that may remain on this site. Please advise us if you spot any. Thanks!

Did you know travel doesn’t have to be expensive? Imagine being able to afford a trip every month. Or how about not going back to work at all?

Lost Wanders gives you the tools you need to know right now to work less and travel more.

What is the best food in Europe? And where to find it.

10 Facts To Know Before You Go – Krakow

Where to see wildlife in Sri Lanka -The top 8 Experiences